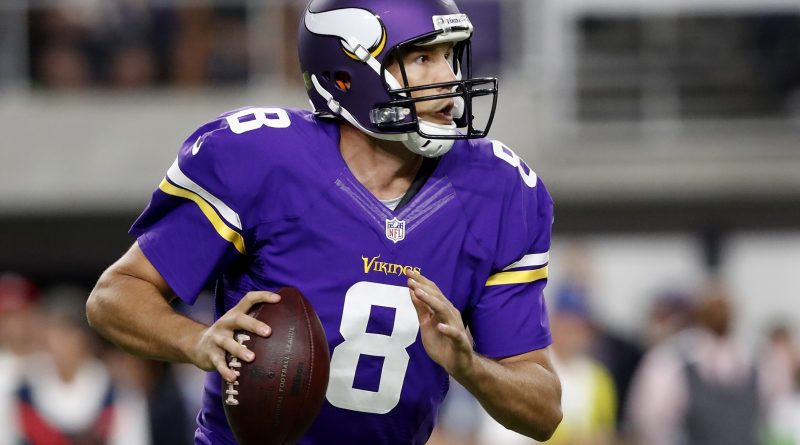 With a little under a week until rookies report for camp, it’s time to take a look at the Vikings 90 man roster (currently at 89) and how camp will have a significant impact on who makes the final 53. Although impossible to correctly predict the final 53 man roster due to injuries, the improbable Mr. Mankato candidate, and veteran regression, it is still useful to get an idea on what to expect and watch for in Mankato’s last hoorah. Instead of overwhelming you with the entire roster at once, we will focus on a single position each day leading up to camp. Today we will focus on a position of interest for the Vikings, quarterback.

Quarterbacks currently on the 90 man roster:

Entering camp a year ago the Vikings were sitting in a position of power. Quarterback Teddy Bridgewater had led the team to an 11-5 finish which was good for an NFC North Championship. Although an early exit to the Seahawks in the Wild Card Round was a disappointment, everyone was anxious to see Bridgewater progression entering his third season after his first Pro Bowl berth. As everyone already knows, an untimely knee dislocation changed the plans of the entire franchise in an instant. As a response the Vikings traded for Eagles QB Sam Bradford on the fly proving that shotgun weddings are still real. Although Bradford arguably had the best year of his career in 2017, an encouraging 5-0 start with the offense falling completely off the rails after that put a damper on expectations. This upcoming season the Vikings QB position will be defined by Bradford’s ability or inability to perform at a high level and stay healthy for a second consecutive year. A co-equal will be the continued monitoring of Bridgewater’s health.

Sam Bradford: Bradford enters the year as the Vikings incumbent starting QB after completing an NFL record 71.6% of his passes in 2016 while also throwing for 3,900 yards en route to a career high 99.3 QB rating. Fortunately Bradford’s roster spot is not in jeopardy and they can back him as “the guy”. Entering a contract year, Bradford will need to prove to the Vikings front office and ownership that he is the Vikings long-term plan at QB and deserves a long-term deal in the range of $20+M. Regardless of what is said, this is Bradford team for the time being and he can seal his own fate in Minnesota. With a healthy O-line and improved running game Bradford should be asked to use his biggest asset, his raw arm talent. Although it will be hard to top his completion percentage and interception numbers a year ago, increased yardage output and TD’s will be positive signs for the offense as a whole.

Teddy Bridgewater: As mentioned above, the biggest question mark as we approach July 26th is the health of Teddy Bridgewater’s knee. Although Teddy has been rehabbing like a mad man, that doesn’t mean that he is physically able to take contact and protect himself on an NFL football field. On the 26th Bridgewater will undergo a team physical which will dictate whether he opens camp on the active/PUP list or active roster. On the active PUP list Bridgewater would be eligible to return at any time during the preseason. Just to cover all our bases, if Bridgewater were to be activated he would need to be placed on IR if the Vikings determined him unfit to play at the end of the preseason. Either way, the real roster decision will be made on cut-down day when the Vikings ultimately determine whether to keep Teddy on the active 53-man roster or move him onto the reserve/PUP list. Once placed on the reserve/PUP he would be prevented from participating in football activity for the first 6 weeks of the season. This is the decision that could provoke the NFLPA to step in and verify everything is fair. Why? Under article 20 section 2 of the CBA the wording suggests that if Bridgewater to be on the PUP list for the first six weeks of the season the final year of his contract would toll into 2018, a massive benefit for the Vikings. If the Vikings are attempting to toll a player’s contract it could set bad precedence for the NFLPA. Bridgewater should have every right to prove he is healthy enough to play, but even if activated there should not be questions on who this team belong to for the time being. Sam will have every opportunity to prove his value and barring a significant injury to Bradford I wouldn’t expect to see Teddy Bridgewater in 2016 with a decision being made on his future early in the the 2018 off-season.

Case Keenum: After the retirement of Shaun Hill the Vikings were able to get their hands on a strong insurance plan in free agency. At the time I considered this a very underrated signing by the Vikings. Many forget that Keenum was the opening day starter for the Ram in 2016 before Jared Goff was handed the keys ⅔ of the way into the season. The expectation isn’t for Keenum to come into camp and compete for a starting spot, but it is nice to know you have a reliable backup QB after last years debacle. As a QB, Keenum profiles as a game manager who will take what is given to him without putting much added stress on opposing defenses. Although not flashy, it is a nice package for a backup QB. Regardless if it’s an in-game emergency of 2-3 start during the season, Keenum won’t lose you many games. Throughout camp Keenum will be competing head to head with Taylor Heinicke to secure his spot within the final 53.

Taylor Heinicke: Although nothing would have been handed to him in 2016, Heinicke picked the wrong year to kick through a glass door and sever a tendon in his leg. However all was not lost as the Vikings stuck by Heinicke throughout 2016 and carried him on the roster after a strong preseason in 2015. Heinicke has a lot of raw talent and it will be interesting to see how much he has been able to harness it over the past two years. An underrated point to watch will be to see how he adapts to Pat Shurmur’s offense after being signed as a fit for Norv Turner’s air coryell attack. The change in offenses will force Heinicke to make quicker decisions rather than showing off his arm and ball placement. As noted, Henicke will go head to head against Case Keenum in camp but will also have the opportunity to put together film for other teams. Heinicke with only 2 accrued season in the NFL would be PS eligible (if he clears waivers) which could be a consideration as the Vikings decide to carry 2 or 3 quarterbacks as they move towards the regular season. With a strong pre-season Heinicke will be a very tough decision come cutdown day with the risk of him being claimed elsewhere.
Wes Lunt (R) : Similar to prior years the Vikings bring a UDFA QB into camp to spread the reps around. Unlike past camp tryouts, Lunt is actually an intriguing prospect to follow as a potential practice squad candidate. Lunt was a big name QB prospect entering college that has had injuries derail his career thus far. At Oklahoma he was an immediate starter before a knee injury forced him to the bench and led to an eventual transfer back home to Illinois. While playing for the Illini, Lunt showed the arm talent to make every throw, especially targeting receivers up the seam. Lunt also has prototypical size for the position and advanced footwork due to starting at the collegiate level earlier than most. The major red flag with Lunt aside from his injury history is his inability to move in the pocket and slow decision making. Lunt sits at the top of his drops and will not move off his spot until a receiver is open versus. finding a throwing lane. It will be interesting to observe how quickly he can process NFL game speed, which will be his key to sticking around a bit longer.