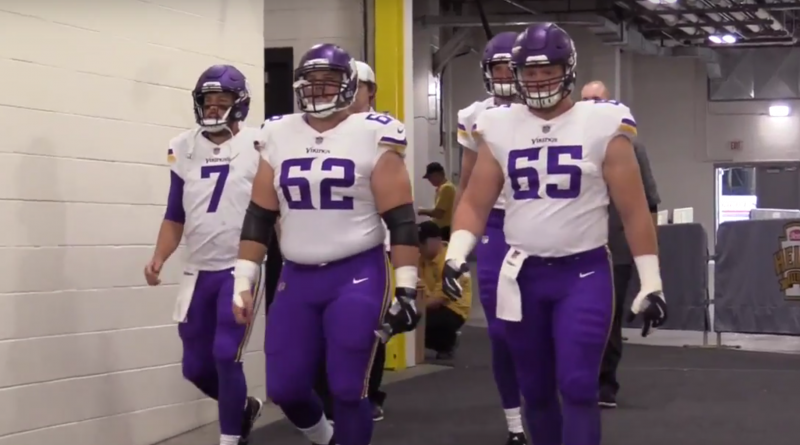 When the final gun sounded to end the game in Pittsburgh, Viking fans were left wondering, “how did we get blown-out so badly, after looking like a Super Bowl contender against the Saints”?

Well, there are two answers to that:

So, does that mean Viking fans should pack-it-in and start preparing for hockey season? Hardly.

For those wondering, Sam Bradford was really injured. He moved very gingerly on the field, and when he walked out of the player’s tunnel onto the field in street clothing.   But, he was not on crutches, was not wearing a brace, and was not being constantly iced. He will be back, the question is, whether it is next week, or sometime thereafter.

It is frustrating to be a Minnesota fan, for a team that constantly teases with potential, and then reminds us that Viking fans seem to not be worthy of having nice things.

However, this 2017 squad does have potential. The defense is the real deal. They gave up just 180 yards of offense through three quarters yesterday, and did not break until they had been on the field for 33 minutes and got worn out.

All will talk about the loss of Sam Bradford being the reason we lost. It wasn’t.   The Steelers scored after Brian Robison uncharacteristically jumped offsides on a 4th and 1 play. They scored again after a 51 yard interference penalty on Trae Waynes (who has a habit of grabbing his receiver whenever he thinks he is beaten – the officials have pretty good eyesight Trae).

Trailing 14-3, the Vikings forced a 51-yard FG attempt by Steelers kicker Chris Boswell. Boswell’s kick was wide left, so the lead would not extend. Or would it? Unfortunately, Nick Easton lined-up over the center on the kick, giving Boswell a second shot from 46 yards. Of course, he drilled it right through the middle.

17 points for the Steelers, yet none were really earned.

It wasn’t until 5 minutes were left in the third quarter, that Pittsburgh finally scored their 20th point, and their first 3 points without an assist from Minnesota.

By that time, the Vikings were in full catch-up mode, with a quarterback operating with a limited playbook and facing a Steeler defense that knew the Vikings had to pass on virtually every play.

Certainly the unexpected loss of Sam Bradford for this game hurt, but this team could have competed and maybe stolen a loss from a very good Steeler team, on the road, on a short week, and at the Pittsburgh home opener.

Dalvin Cook continued to show flashes that indicate he could break it on any play (and, yes, he scored on the 25 yard run – we have no idea why the reversed the TD and placed the ball at the one yard line, not the one inch line).   Adam Thielen always competes, but Case Keenum could not find him.

Jarius Wright played much more yesterday, presumably to give Keenum some comfort zone with a 2nd team receiver. Meanwhile, Laquon Treadwell played the majority of the snaps on offense.   He is a big target, and while he did make some tough short catches, it should be noted that he gets very little separation.

Kyle Rudolph made on miraculous catch on the 3rd and long, showing his basketball leaping and rebound skills to keep a drive alive.

The running game was average. Cook looks fine, but Offensive Coordinator Pat Shurmur had a gameplan in the first two and half quarters that looked like he accidentally picked up Brad Childress’s old “kick-ass” offensive playbook.   For a long period of time, he just kept running Cook up the middle of the Steeler defense on first down, leaving his less-seasoned QB with 2nd and 3rd and long situations.

For his own part, Case Keenum was up and down. He had some nice throws, but was wildly inaccurate on others, and often throwing into double coverage on long distance downs. He did not play poorly, and he did not prove he could really be a starter in this league.

The offensive line played pretty well – give them a B-minus for the game.   Center Pat Elfein is going to be elite, while Mike Remmers and Nick Easton struggled at times.   But, in general, the line gave Keenum enough time to throw, and will just keep getting better as a unit.

Some fans have already questioned Sam Bradford’s heart for not playing. But, that is unfair, as his heart was willing, his knee was not.   Without mobility against this Steeler defense, you put your franchise (at least for now) QB in harms way, as a sitting duck back there to get hurt worse.

Sam tried to give it a go at around 9am eastern time, but all he could do was throw without putting his left leg into throws. He didn’t quit, he tried. No one looked more disappointed that Bradford looked when he walked alone out of the players tunnel onto the field.

How bad his injury really is, is unknown to anyone but the coaches and trainers. We can tell you that he was not on crutches, had a small limp (very small), but walked slowly. He did not wear a brace and did not ice the knee before, during or after the game. He simply showered after the game and left, without talking to reporters (coach’s orders – Sam will talk when allowed, but allowing some info out might prove a competitive advantage as Tampa Bay prepares to play the Vikings).

It’s not time to get Colin Kaepernick – imagine that if you had Sam, Teddy and Colin. Holy smokes! But, it is also time to wonder what this mystery injury is.

In all, the defense looked very solid and gave Steeler QB Ben Roethlisberger fits in the pocket. There were not a lot of sacks, but Ben felt the Viking rush, and it forced some of his throws off target.

You have to see LeVeon Bell in person to appreciate his running style. He doesn’t seem particular fast, or explosive, but he moves so patiently in the hole, all of the sudden, he has 6 yards gained. The Vikings held him to 87 yards, and that is a win for the Vikings.

Once the Vikings moved Xavier Rhodes to cover Steeler star receiver Antonio Brown, he largely locked him down.   Terence Newman got beat a few times, including on a slant for a TD, but he is 38 years of age. You can’t expect him to cover receiver’s one-on-one that well in the red zone.

While Eric Kendricks played solidly, it was Anthony Barr who showed up (hamstring injury and all) ready to play, and had 8 solo tackles. He finally showed some flash, after a long drought.

Everson Griffen was a terror in the pass rush, and Tom Johnson was notable. However, Danielle Hunter was never a threat to get to Roethlisberger.

In the end, the defense did not surrender large yardage (beyond penalties) until midway through the 4th quarter, and by that time, they had been on a hot, muggy field for about 8 minutes longer than the Viking offense had.

This unit is solid, they just need to cut out the mistakes, and they will be fine in a week.

Perhaps no coach has endured as much heartache as Mike Zimmer since he got to Minnesota. First, he is forced to use his rookie QB (Teddy Bridgewater) too early, due to an injury by Matt Cassel.   He then loses his franchise RB for two long stretches in 4 years. He lost that franchise QB to a freak injury before the 2016 season. He suffered through 24 long-term injuries in 2016, holding the team together with duct tape.

Yesterday, he lost his starting QB, who set the world on fire just 6 days before, to an injury that no one witnessed.

So, if you are him, it gets tiresome, and would make you cranky. But, not cranky enough that he has to be so surly a post-game press conferences. Every media member has the right to ask about key injuries. If they didn’t, fans would cry holy heck because they want to know these things before the spend their hard-earned money and emotion on this team.

Sure, media members can be aloof, ask dumb questions and be a bit arrogant. But, they were within the rights of doing their jobs yesterday.

In the end, we believe Zimmer was as upset about the penalties, as he was about his misfortune at quarterback.

It is only one game. It was a loss to a non-conference opponent (won’t hurt badly in tie-breaker playoff scenarios) and came against a Steeler team that most consider the best 1 or 2 teams in the league.

Most fans who looked at the schedule in July, counted this one as a likely loss. So, it was. It is time to move on for Tampa Bay, at home, and perhaps with the starting QB under center, and referee’s flag remaining in his pocket more often.