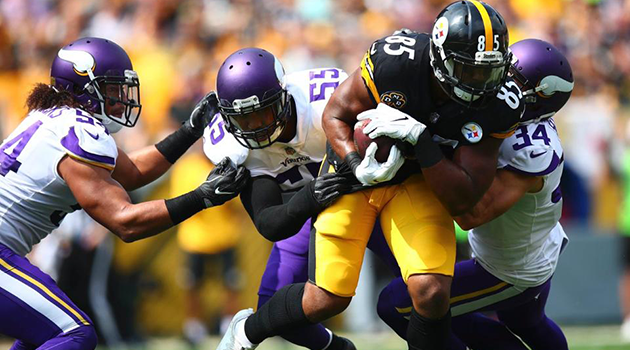 Even before whispers of quarterback Sam Bradford’s mysterious knee condition would keep him from taking Heinz Field there were plenty of signs that this was going to be a tough week for the Minnesota Vikings.

Heading into the second week of their schedule the team was facing an uphill battle before they even boarded the plane for Pittsburgh. There was the potential for a let down performance after an emotional win in the Vikings opener. The Vikings were traveling on the road, against one of the leagues better defenses, and a star studded offense with Ben Roethlisberger, Antonio Brown and LeVeon Bell. In the end the team played poorly, but they showed all the signs of not being a bad team. If not looking like a great team.

To say that Case Keenum had any sizable amount of responsibility in the team’s loss would be an inaccurate statement. Sure he had his fair share of mistakes. He failed to connect on several throws, but he showed that he was capable of holding the reigns and delivering passes once he was eventually allowed to do so. For far too long in the first half his leash was too short, the playbook too limited and in fact seemed to put him in less than manageable situations far too often. There is a line of thought in the NFL that establishing a run game early on will allow a quarterback to settle in. When that game plan puts your quarterback in 3rd and long situations for the better part of two quarters it is on the coaches to scrap that plan.

For the most part the offensive line played fairly well. They gave Keenum ample time to throw on many drop backs, despite his decision making being noticeably longer than starting quarterback Sam Bradford’s. On the other hand the offensive line had their correctable moments as well. The run blocking in particular has plenty of room for improvement, but that is hardly unexpected for an offensive line that has played a grand total of two games together as a unit and was going up against a top tier defense.

On the defensive side of the ball we saw many more instances of the team playing poorly, but again this is not a bad unit. Penalties were a massive problem for a usually fairly well disciplined team. Totaling 11 for 131 yards that is arguably a bigger hurdle to overcome than losing your starting quarterback. We saw a 4th and short attempt by the steelers deep in their own territory where everyone in the state of Pennsylvania knew that quarterback Ben Roethlisberger was begging for the Minnesota defense to jump offsides. There would be no snap of the ball. And still defensive end Brian Robison took the bait. An extremely rare mistake for the talented veteran. Minnesotas defensive secondary seems to deliver for the Steeler’s passing attack when they were faltering on their own. Correctable mistakes.

In the end this team played poorly and still kept the game within reach for much of the contest. The lion’s share of their mistakes are correctable and presumably their starting quarterback will return. The team is looking at a stretch over the next six games traveling only once to Chicago. This is a perfect time for a talented team to improve in the areas it needs and to pick up some steam heading into the back half of the season.