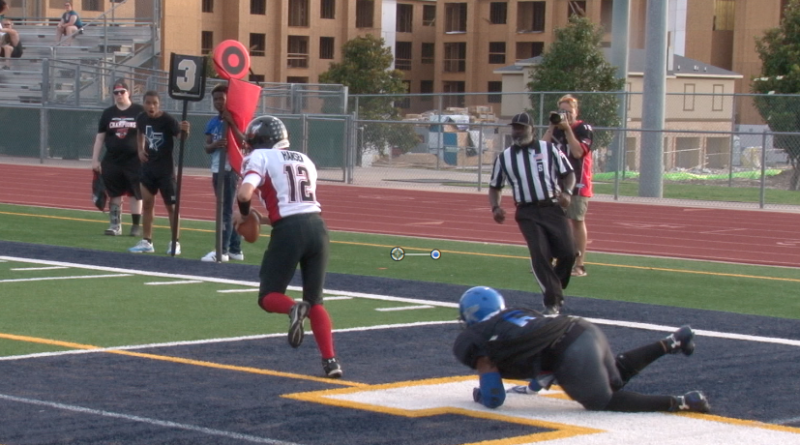 The fans of Minnesota will have to wait at least one more year to see the state’s first professional football title, as the Minnesota Vixen fell to the Dallas Elite, 53-0 in the 2nd round of the playoffs in the Women’s Football Association on Saturday night in Carrollton, Texas. But, as lopsided as the score was, it does not tell the entire picture of this scrappy Minnesota team.

After bludgeoning the Kansas City Titans 40-6, to earn their 3rd victory in one season over the Titans, the Vixen drew the red-hot, and undefeated Dallas Elite.  The Elite name fits, as this group has not lost a game in 2017, and, even more unbelievable, Dallas did not yield a single point to any opposing team this season. Their average margin of victory was 66-0!

The evening was not only hot at 96 degrees and 114 degrees on the artificial turf, it was humid as well. The only saving grace was a strong southerly wind, that gave some relief from the heat, but also would prove a challenge in the passing game.

The Elite were as advertised – big, strong, athletic and very fast.   They are a run-oriented team, with a running back in Odessa Jenkins, who averaged 12 yards a carry coming into the contest. That trend continued, but the Vixen never rolled-over.   They had some hard hits on QB Jessica Gerhart, and even forced Gerhart to throw only her second interception (to go with 20 TDs) of the season in the third quarter. But in the end, no matter the desire, sometimes the deeper and better team wins.

YOUR Minnesota Vixen mounted an impressive 12 play drive late in the second quarter. After recovering an Elite fumble on the Vixen 5 yard line, they marched 90 yards in 11 plays to the Dallas 5.

That drive saw Vixen Quarterback Kiersten Hansen roll away from trouble in her own end zone, and find WFA league-leading WR Sam Barber on the sidelines, who made a miraculous tight-roping catch for the first down.   All-American RB Grace Cooper rumbled for 20 yards behind text-book seal blocks by offensive linemen Kristen McClellan, Hannah Martin, and 19-year veteran Michele Braun.

Cooper also slashed for 10 more yards in the drive after catching a Hansen swing pass.   The Vixen pierced the red zone, when Hansen tossed a 25 yard pass into traffic, and former college basketball star Barber, boxed out the three Elite defenders and out-jumped them to haul in a pass at the Vixen 5.   Unfortunately, the Vixen would never see the end zone, as 2 plays later, they fumbled the ball to the Elite with just 58 seconds remaining in the half, and it was the last real threat the Vixen would pose to the Elite.

So, a loss is a loss, whether it is by 1 point or 50, it still sends you home on the nearly 1,000 mile plane trip back to Minnesota, and it is painful.

So, for those who have never experienced it, what is women’s professional football like? Just like what you see from men.   It is fiercely competitive. You have women with size – both weight and height.   They have the same strategies, very similar athletic abilities, and play a fun brand of football.

They also hurt the same way men do – with injuries suffered in the game that are very real.   And also, with the pain of losing.

Yet, through it all, this team hung together, played as a team and never quit. They may have lost, but they proudly represent Minnesota each time they step on the field. Most importantly, with a 67% winning percentage in 2017, the also win for the state of Minnesota.

So, as they watch Dallas move on to the third round of the playoffs, the Vixen go home for offseason planning and preparation for a 2018 season, where they expect to take the next step in their quest to bring home Minnesota’s first professional football title. Well done Vixen, well done!