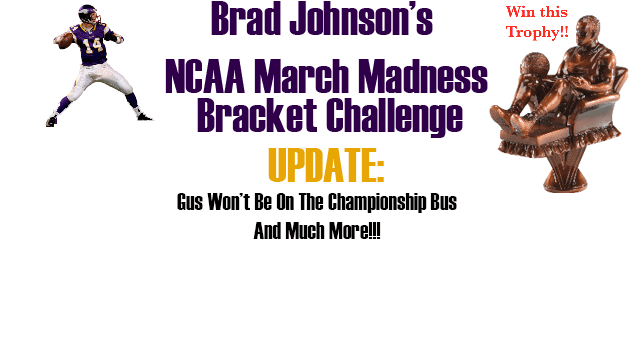 Big change in the leadership over the weekend in the Brad Johnson NFL Alumni March Madness Challenge.

First, our defending Champion Gus Frerotte is sitting alone in 98th place, and with the upset loss by Duke, he has no chance to repeat in 2017. So, enjoy the championship shine Gus, you won’t be cutting down the nets this year!

But, equally odd is to look at the top of the leaderboard. WR Matthew Hatchette is alone in 1st place, but he has Villanova (lost in round 2) as champion, so Matthew will be dropping quickly in the standings, and he is unlikely to win.

In the fan division, A1 Janitor is not only in 1st place, but he has UCLA to win the title, and the only other players in the top 20 to pick the Bruins are Keenan Jones and Hudson Wilson. A1 will go as UCLA goes. Viking Bob can secure a victory if Arizona wins, and Paul Smith can do the same with a Kansas championsnip.

Center Jeff Christy is 6th, but he too won’t be able to hold the spot through next weekend, as he selected Villanova to win it all. Ben Leber was in 1st place for a few games, but has dropped back to 17th, but is in danger due to his Villanova Championship pick. Also at #17 is Guard Ed White, who has Florida to win – he is one of the rare ones to pick Florida, so he CAN win.

Hall of Fame Guard Randall McDaniel continues to show improved basketball prediction skills, as our last place finisher in year 1, is in at #29, but he too picked Villanova to win.

There’s a media struggle at #37, as Bob Sansevere (Pioneer Press) and Mark Craig (Star Tribune) are in a deadlock, but Bob has UCLA to win, and Mark has Gonzaga. Both teams are still alive, but only one of these guys will go up, the other will likely go down. As Craig puts it, “As an Enemy of the People, I have to say my picks this year were huge. I actually saw where someone said I went 32-0 in Round 1 while Crooked Brad Johnson went 0-32. The 20 people who say they’re ahead of me really aren’t. #fakepicks”

DT Henry Thomas is also tied in 37th place, but he is the highest ranked participant that selected Arizona to win the Championship. Last year’s 4th place finisher is a real threat for the crown.

TE Brent Novoselsky has quietly inched up from 89th place to 45th and, believe it or not, he is the highest ranked player who selected Kansas to win the tournament. On Saturday, Brent said, “I am pacing myself”, and true to his word, he may be the dark horse here on the outside rail.

QB Sage Rosenfels is “all-in” with Iowa State, and he WILL win it all (even though he is tied in 45th place) if they pull of the upsets, as no one else picked Iowa State to grab the crown. A homer? Maybe, but looking pretty smart right now.

At #54 are Defensive Lineman Bob Lurtsema and Vikings.com Lindsey Young. Lindsey could make some noise, with Florida in the finals, but Lurtsema may finally see results that back his constant jawing. His entire final 4 picks are all still alive, with North Carolina as his champion.

Luck is a fickle partner, as RB Darrin Nelson rose all the way to 2nd place over the weekend, and with Villanova losing, along with quite a few misses on the Saturday and Sunday games, he is on a meteoric drop in 61st place. Before you laugh at him, he lives in California – what’s the temperature in your city?

Tackle Todd Steussie used a complicated computer simulation program to make his picks, and it looked great until his Champion Creighton lost, and so did many of his other selections on Sunday. Todd is headed to the basement, where Randall McDaniel says of his experience there, “very cold, very lonely, and no one visits”

RB Chuck Foreman has slid all the way to 81st place, however, he is the highest ranking player to select Kentucky to win the Championship, along with LB Pete Bercich. Both could win it if Kentucky pulls of the upset win.

So, enjoy your positions while you are up on top, as anyone from 1st to 81st can still win this thing!