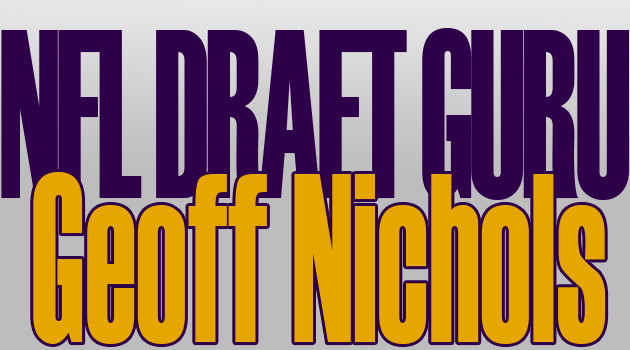 A week since mock draft 2.0 its time to get back at it now that the draft is only 3 weeks away. Although nothing material has changed in the past week, the Vikings hosted their annual top 30 visit this past Tuesday. With a few names hitting the airwaves one would assume that the team is starting to stack its board in anticipation of the draft. As we approach the draft we get a better idea on where runs will setup and how each team may approach their needs.

2 (57) *Via HOU – Dorian Johnson (OG Pittsburgh): With a weak tackle class the Vikings took the proactive approach of finding a pair of bookends in free agency. With their money spent on tackles the team is currently left with Jeremiah Sirles plugged in at RG with limited depth behind him. This isn’t necessarily terrible, but a long-term solutions is needed. During the collegiate season the Vikings spent plenty of time scouting Pittsburgh. Dorian Johnson is the blue chip prospect entering the draft from their program this year. Johnson lacks the elite athleticism you look for in 1st/early 2nd round guards, but he has the pure power to win at the point of attack in pass protection. In the run game he succeeds once he gets moving downhill but will need to refine the angles he takes to blocks in the open field. An underrated aspect of Johnson’s game is his familiarity in a pro style offense. This should make him a plug and play starter in year one at either OG position.

3 (79) – Tanoh Kpassagnon (DE Villanova): The Vikings have made it a habit of selecting freak athletes to develop on the defensive side of the ball and Kpassagnon fits the bill. Defensive end is not an immediate need but could simplify Datone Jones’ role and prepare for life after Brian Robison/Everson Griffen (potentially). Being able to keep Jones on the inside at 3-tech in a rotations with Stephen fills the need indirectly. Tanoh is not a refined pass rusher but has the size, length, speed combination teams covet at the position. Similar to Danielle Hunter as he learns to setup pass rushing moves his pure athletic traits won’t limit what he is capable of doing on the football field. Pass rushers are arguably the most valuable NFL asset aside from QB’s and being able to develop talent from the 2-4th rounds will serve the team well moving forward.

3 (86) *Via MIA – ArDarius Stewart (WR Alabama): The losses of Cordarrelle Patterson and Charles Johnson this off-season has made outside receiver depth a critical need entering the draft. Internally there is hope that Fruechte will be able to take some snaps next season, but more speed is needed within the WR group. Stewart has the long speed to take the top off the defense and is elusive in the open field. Alabama is a run first offense which limited Stewart’s effectiveness in college. Coming into the NFL he will need to become a more refined route runner and cut out the random drops that plagued him at times. Overall he should be able to take snaps immediately at split-end/flanker and compete for kick retuning duties.

3 (89) *Via HOU – Marcus Maye (S Florida): This is a carryover from my previous mock, although I am getting the gut feeling Maye end up going earlier than expected. Sendejo took a step in the right direction during 2016 the Vikings felt the consequences whenever he or Harrison Smith were unable to take the field. Maye is a defensive leader, a trait the Vikings FO has coveted over the years and a versatile safety who can play both in the box and over the top. With some time to develop Maye would be the successor to Sendejo and the long-term partner for Smith on the backend of the defense.

4 (120) – Julie’n Davenport (OT Bucknell): From those who I have talked with, Davenport’s draft grades are all over the place. Some teams believe that he can develop into an effective LT early in his career due to his elite length. Others don’t believe that he has the power and mental awareness to be a LT in this league. Given the players the Vikings currently have listed as OT depth, Davenport is worth the gamble. As noted he has the length teams covet at LT and has shown some effectiveness as a 1×1 blocker at Bucknell. The competition jump may give him some initial trouble but over time he has the skill set needed to stick at OT in the league.

4 (128) *Via MIA – Traded to Houston along with the Vikings original 2nd round selection.

5 (160) – Jamaal Williams (RB BYU): The signing on Latavius Murray shows the Vikings are ready to accept the NFL trend of a backfield by committee. Although Murray addresses the position immediately a historically deep RB class offers tremendous value at this point in the draft. Williams is a tenacious back who can work both from under center and out of the gun. Once running downhill he is difficult to bring to the ground and was effective moving the chains in short yardage situations. In the open field he has a subtle elusiveness to his game. The flaw in William’s game is his inability to create for himself behind the line of scrimmage. Starting his career in a 3rd down role will be beneficial as he develops into a more functional piece of the offense.

6 (199) – Elijah Lee (OLB Kansas State): Since Mike Zimmer became HC of the Vikings it is apparent they are going to spend a lot of time in their nickel package. Lee is a nice LB prospect who plays well through garbage and is always near the ball. In coverage he needs to continue developing but has the raw physical traits to evolve his game. Lamur/Robison likely will beat him in a competitions straight up, but he can be an impact special teams player which is a value in the later rounds.

7 (232) –  Sojourn Shelton (CB Wisconsin): The resigning of Terence Newman gives the Vikings some flexibility at CB but you can’t trust your luck on Newman remaining the same player indefinitely. Shelton is an undersized DB but makes up for his lack of size with an strong ability to break on routes and breakup passes at the catch. In the NFL Shelton will likely develop into a slot CB which has an ever growing value within the league. Depending on how the Vikings divide their slot duties, Shelton should be able to compete as depth in camp.