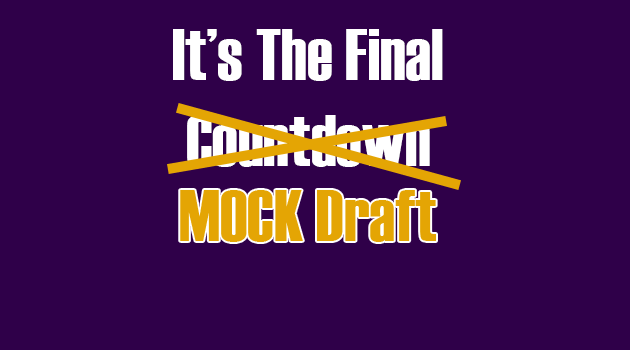 2 (38) *Via JAX – Jabrill Peppers (S/OLB Michigan): The Vikings move up the board trading 2(48) and 3(86) in exchange for 2(38) and 5(148). The Vikings have an apparent love for Peppers and make the move up the board early in day two to secure their guy. From a pick perspective the Vikings net even in a trade with the Jaguars and cover off multiple needs with a single player in Peppers. The Vikings have toyed around with adding an athletic S/OLB combo over the past few years and finally pull the trigger. Peppers has the ability to play LB in the base defense and be moved around as a chess piece in Zimmer’s scheme. He has the ability to blitz but also the ability to cover both TE’s and slot receivers. That type of versatility really opens up what you can do with Anthony Barr on the strong side and even Harrison Smith on the back end. Aside from filling a needs on the defensive side of the ball, Peppers is an elite kick and punt returner and can also be a strong gunner. Lastly, he brings an electric attitude with him and swagger, something I personally believed was missing from the Vikings defense a season ago.

3 (79) – Ethan Pocic (C/OG LSU): Keeping their first selection in the 3rd round the Vikings pick up a versatile piece, adding depth to the interior O-line. Pocic was a swiss army knife for LSU and got regular snaps at both center and guard. In the NFL he can be a day one starter at RG but likely projects as a center moving forward. On the field Pocic is a smart player who will be successful in a run first attack. In the running game he is agile and gets downhill effectively to finish his blocks. He will need to continue developing as an anchor in pass protection but does enough to keep quick defenders from going through him. In 2017 Pocic likley would be the starting RG after a camp competition with Jeremiah Sirles. In 2018 he could slide over to center to replace the aging Joe Berger.

4 (120) – George Kittle (TE Iowa): Watching Kittle’s tape a few weeks back he just look like a future MN Vikings. Behind Kyle Rudolph the Vikings don’t have much depth at TE, which limits their creativity. Kittle is a strong and willing in-line blocker within the formation. As a receiver he pressures the slot but has the athleticism to gain seperation on curls underneath. Iowa used him around the field and tried to find the best matchup to use him as a PF in the end zone. Kittle has the skills to take snaps immediately and would allow Pat Shurmur to isolate Kyle Rudolph on slot CB and LB’s. This not only will improve the Vikings red zone offense, it will open up the Vikings interior passing game as well.

4 (128) *Via MIA – D’Onta Foreman (RB Texas): Early in the draft process many thought Foreman could hear his name called in the 2nd round after a successful collegiate season with Texas. Over time other backs seemed to have overtaken him, but that is the nature of being in the draft deepest position. Foreman is a bowling ball between the tackles and is “sneaky fast” in the open field. Early in his career Foreman will likely be a 2-down player as he develops into an NFL level pass protector. He has the body and size to learn this role quickly if it is focused on. Once he can be a dependable player on 3rd down he can develop into the Vikings 3-down workhorse. Latavius Murray and Jerrick McKinnon will likely carry a majority of the load in 2017, but nothing is set in stone after that.

5 (148) *Via JAX – Tanzel Smart (DT Tulsa): The signing of Datone Jones as a 3-tech during free agency has proven to be a good value for the Vikings due to Floyd’s struggles rehabbing his knee. This pushes the need for an interior lineman down the board a bit in my mind. Jones will likley rotate with Shamar Stephen and Tom Johnson but another 3-tech would be a nice depth add in the middle to later rounds. Smart has the quick feet you look for in a 3-tech but will need NFL level coaching to improve his ability to shed blocks and finish in the backfield. There is no better place to do that in MN when you’re not pressured to be on the field day 1. Smart can develop and play periodically if needed before filling Tom Johnson’s role after this season.

5 (160) – Damien Mama (OG USC): Some may be surprised to see another OG in this years class over an OT, but this move secures the Vikings depth on the interior line moving forward. In 2018 if Pocic moves to C there is a potential opening at RG. Damien Mama is not a player who is ready to step in and start on day one but could be ready by the beginning of the 2018 season. The Vikings have not been proactively filling their O-line needs and this would be a great time to start. Mama struggled with weight issues during his time at USC but has greatly improved his conditioning. On the field Mama projects as a run mauler due to his size and heavy hands. In pass protection he has the size to anchor but will need to greatly improve his footwork to counter pass rushers initial moves. Although Mama shows the heavy hands needed at OG he needs to be more consistent with his placement and simply be quicker to prevent pass rushers extending into his chest and redirecting him. With a year of development under his belt there is a good chance he could make an impact in the future.

6 (199) – Channing Stribling (CB Michigan): Zimmer loves his DB’s and another developmental corner is needed on the roster. There is only one year of tape on Stribling but he has the size/length teams covet in their outside DB’s. On the field Stribling is an aggressive corner who likely need to develop off-man and bump and run skills. Long-term this will be better for him as he learns to keep his hands off DB’s. To be successful in the NFL and coach will need to reel in Stribling’s aggressive nature and teach him to follow his instincts. At this point in the draft you take physical attributes (size/speed) that cannot be taught and hope the coaching staff can develop a player.

7 (232) – Stacy Coley (WR Miami): The losses of Cordarrelle Patterson and Charles Johnson have done a bit of work on the Vikings receiving depth and they will draft a player at some point over the weekend. Coley isn’t a clean off the field prospect and is a one-trick pony which pushes him to the drafts last frame. On the field Coley has one speed, fast, and is a vertical threat by nature. Since the loss of Mike Wallace the Vikings haven’t been able to stretch the field and need someone capable of pulling a safety with the down the sideline. To stick on a roster long-term Coley will need to develop a more comprehensive route tree to work underneath, but his deep speed could be worth a roster spot in 2017.