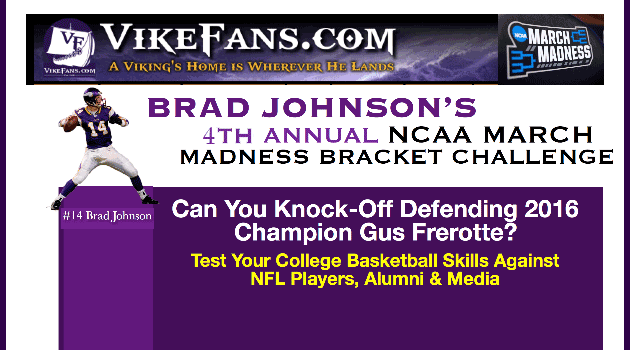 Welcome to the 4th annual Brad Johnson NCAA March Madness NFL Alumni Challenge, where we have over 100 competitors for the crown.

With the first round of games now complete, there are some mild surprises at the top of the leaderboard.. In the fan division, 3 sit atop the standings – Dusty Volner, Greg Vandagriff, and Oscar Paulin. While each had 29 picks correct, Vandagriff has a slight lead, as he still has a path to a maximum score of 189 in the contest.

On the NFL Alumni side of the fence, former Chargers and Vikings guard Ed White stands alone, showing the younger bucks how it’s done.. Tied with Ed is Brad Johnson’s own son Jake with 28 correct picks in round 1.

Brad Johnson, who has taken some severe heat the last 2 years for always picking the #1s to advance to the final 4, made the bold move to have three #1s and #2 Arizona in the final 4 , is in 12th place, but just one correct pick behind.

Usually keeping pace in the basement of the standings, former Vikings RB Darrin Nelson is also in 12th place, proving that you really don’t need to know anything about basketball to do well in the pool!

William & Mary Offensive Coordinator Kevin Rogers shows he has a pulse this year, and is tied at 21st along with former NFL WR and current actor, Matthew Hatchette. Matt shows us that the Hollywood=types know their sports too!

Our first media member checks in at 21st as well, with the Star Tribune’s Mark Craig holding of Vikings.com writer Lindsey Young, who is in 53rd place.

Tackle Todd Steussie (Vikings, Panthers, Bucs and Rams) shows that if you use a professional grade simulator to make you picks (and he says he did!), you too can be in 40th place….for now. No need for the quiet chuckles about his low position, Todd held the basement spot just 2 years ago in the challenge, and is striving for mediocrity.

Chargers and Vikings LB Ben Leber is manning the 53rd spot, as he says he had his young daughter throw darts at a chart to make his picks. This is a vast improvement from the last 2 years for Ben, so well-done! Brad Johnson’s son Max is tied with Ben, as is our 2016 fan-champion RS Express.

RB Chuck Foreman is struggling to hang onto the 67th spot, as he watched his final 4 pick Maryland get knocked-off by Xavier in round 1 – proof that you never fall in love with your home-town team when picking!

Along with Chuck in 67th place is a log-jam with LB Pete Bercich, All-Pro Guard Randall McDaniel, and QB Sage Rosenfels. Pete is sticking with his Notre Dame alma mater Notre Dame for a final 4 bid, and if that happens, he is likely to rocket into the top 10. Randall McDaniel was our first year last place winner. He got all the way to 24th, and now he appears to be deciding if he likes the basement better than the penthouse. Sage is proving to be a homer too, as he picks his Alma Mater Iowa State to be an upset winner, and cutting down the nets in the finals. He is the only player in the contest to pick Iowa State, so if they do pull-off the championship win, he will win it all!

Giants, Vikings and Seahawks Defensive Lineman Bob Lurtsema talks a big game, and says he will school Brad Johnson each year. But, Bob might have caught the “short bus” to school, as he is manning the 87th position along with former Browns and Vikings RB Leroy “The Mouth” Hoard. Surprisingly, our 2016 NFL Alumni winner, 15 year NFL QB Gus Frerotte is also struggling in 87th place. But, Gus is one of the few players in the contest to select Duke to win the Championship, so he can still vault up the leaderboard. Lurtsema has not vaulted since he was 6 years old, so expect him to yap a lot, but make a comfortable home near the bottom of the standings.

Bears and Vikings TE Brent Novoselsky proves that an Ivy-League education counts for little, as he secured the 93rd spot along with former CFL and NFL star, QB Joe Kapp.

There’s still plenty of time for huge shifts in the standings, so let the traditional trash talk begin – we will summarize the best of the “boasting” comments from your fellow players and publish them after Sunday’s games.