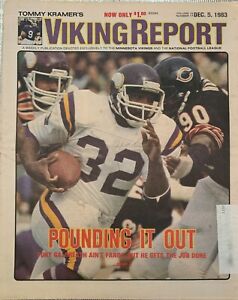 At one time, it was the weekly bible of info for Viking fans before the internet became a "thing". And, note that Tommy Kramer owned it here in 1983 while he was playing still. Started as Viking Report by Karl Kassulke, sold to Bob Lurtsema, who acquired it back from Kramer. pic.twitter.com/W0qRKKAtjN