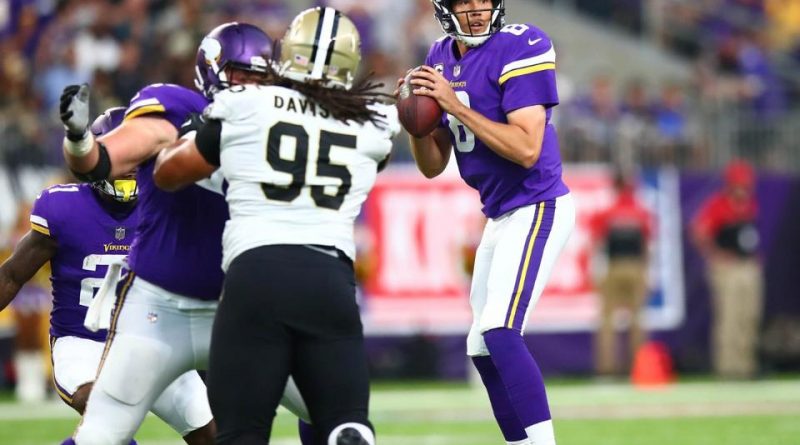 Count me as the first person in line who was dramatically concerned about the inefficiency of the offense in four preseason games, and the leaky nature of the Viking starting defense during these “exhibition” games.

Sure, I had been at training camp, and the line looked better, and the defense looked as ball-hawking as ever.  Yet, I allowed myself to be sucked into the drama of meaningless preseason games to use as a barometer to predict the way the Vikings would play in 2017.

I could not have been more wrong.

That run defense that gave up alarming chunks of yardage during preseason, pretty much locked-down the Saints after Adrian Peterson’s first run of the game.  Brian Robison, who had not played hardly at all in the preseason, was a key to this effort, as he was used liberally throughout the game, and keep the right side of the Saint line in check.  Meanwhile, Linval Joseph was destroying the interior blockers of the Saint’s offense.  Often, you won’t see many stats for a Nose Tackle in the NFL, but Linval’s job is to eat up blockers, and he did just that.

Everson Griffen was a pest all night to Drew Brees and threw him off rhythm by making him constantly pay attention to where he was, and throw the ball just a split second too soon.  Was Brees suddenly old at 38?  Not really, when he had time, he looked just as sharp, its just that this defense didn’t let him settle-in and get comfortable at US Bank Stadium.

Eric Kendricks continues to show why he will no longer be a well-kept secret.  Active is the best word for Kendricks, as he plays downhill (as thought the field is tilted in his favor, and is just a little faster than everyone else when he’s on the field).  He was constantly in the Saint’s backfield, always first to a player after a short run or catch, and his a sure tackler.

Anthony Barr showed up last night, and showed some true fire in his game – let’s hope that continues.  Yes, Ben Gedeon was lost at times, but don’t be alarmed.  He is both a rookie, and a LB that will only be on the field about 20 plays a game when the Vikings are in a base defense (not a nickel or dime defense).

Trae Waynes was the leading tackler last night, and those that watched the game would not be surprised by that stat.  He was a sure tackler, with a few stops for no gain as soon as the ball was caught by a Saint receiver.

Indeed, the Viking Defense looked every bit the way they did in the first 5 games of 2016, and rendered a future Hall of Fame quarterback as just another signal caller.

On offense, it starts and ends with Sam Bradford.  For all the fans who clamor for Teddy (and they should, before his devastating knee injury that wiped out his 2016 season, he was maturing into a franchise-type QB), Sam is the real deal.  Does he throw short?  Sure he does, but so does every QB in the league when no one is open downfield.

The difference on opening night was, a group of (effectively) 5 new offensive line starters showed that given a reasonable amount of time in the pocket, Bradford is laser sharp.  He dropped passes into receiver at times on Monday night as though he were Tom Brady or even the opposing Brees.

Worried about his dink and dunk passes to RBs and TEs?   Well, 18 of his 27 completions were to his wideouts, and they accounted for 278 of Bradford’s 346 passing yards.   Didn’t like his 20 TDs and 5 INTs.  While an unreasonable projection, after one game, he is on a 48 TD and NO interception pace…that seems okay!

Jerick McKinnon looks at home as the 3rd down back, showing the spark and change of pace needed, while the defense worried about the Wide Receivers, and that is all with LaQuon Treadwell still not showing much of a threat to defenses.

While fans continue to appreciate Adam Thielen’s progress, few could expect him to just get better and better each week.  He has deceptive speed and is an elite route runner.   Meanwhile, the dropsies that plagued Stefon Diggs in the third preseason game against San Francisco where long gone on Monday night.  He abused the Saint secondary, and was constantly open, not by a little bit, but often his defender was 5 minutes away….by phone!

Calvin Cook finally showed fans why the team is so exciting about him.  He as great speed, terrific vision, and has that simple ability (that is not simple to learn or use) to make slight shifts in the hole to give him yardage.  He runs with power and authority.  He is no Adrian Peterson as a power runner in his prime, but his complete game may make Viking fans sometimes forget about #28.

And, never to be ignored was an offensive line, that was vastly improved, albeit just for one game.  Riff and Remmers held up well, while Easton looked every bit the part of an experienced guard.  Rookie Pat Elflein showed that the big national stage moment in his first-ever starting gig in the NFL was not at all too much for him.   He showed great athleticism in getting out front on screen passes (they are back!), and consistently made the right line calls.   This line gives the Vikings hope.

Sure, there were bad officiating calls last night, but for a change, those calls were not daggers to the Vikings.   Yes, we are a little worried about a missed extra point, as well as out depth on the Offensive Line.

But, for one big opening night, we are not complaining about our Offensive Coordinator, a short passing game, 3-and-outs on offense, the big penalty that turned the game, or our offensive line coach or poor line play.

For one glorious opening night, fans got to sit back and watch the complete plan of this Viking team unfold in front of their eyes in Mike Zimmer’s fourth year.  No injuries, and a dominating performance for the undefeated Minnesota Vikings.