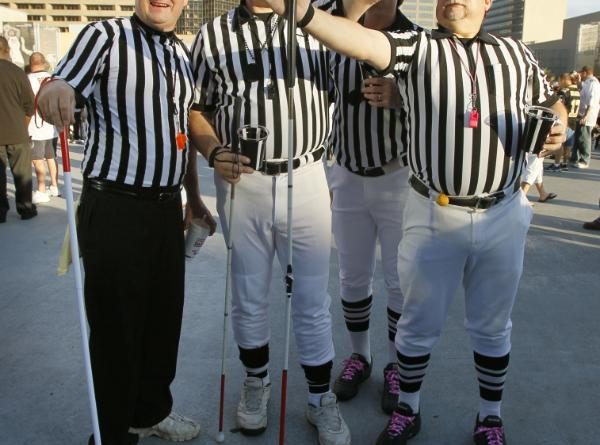 Yes, yes, yes ladies and gentlemen we are back! Your source for specifically chosen, carefully collated news and commentary from the Minnesota Vikings and the NFL at large! Another year of excitement, agony, and trepidation has just kicked off and of course I’ll be reporting it to you like I’m getting paid to do nothing else. Hey we all got dreams, right?

As every year, massive shouts out to the fine people over at Pete Bercich’s Vikefans.com and all the folks there who have created truly the best source for news, interviews and perspectives on our beloved team! Without them, this is just another pimple on the butt of the internet, so thank you to all who make it possible.

That said… Let’s get to it!

Week 1 is in the books and if the oracles are correct, it’s gonna be a loooong year staring into the vacant eyes of zebras as they make bad call after bad call after bad call. I don’t know if it’s in the officials’ training protocol, or if they are not required to take ophthalmologist tests, or if they even are tested for basic problem solving skills, but even in week 1 we’ve seen more bad calls than a typical episode of The Bachelor.

Now I know the rule: If your team plays well you don’t leave it in the hands of the refs, but it still sucks harder than the Housekeeper Nationals to see them occur with frightening regularity, and abject denials of reality following them. Were there bad calls in the Vikings game? Yes there was. Did the Vikings put themselves in position to win despite them? Yes they did. However in the cases of Seattle and Washington, it seems the referees had more than their share of impact in the game. Of course, Washington kind of shot itself in the foot at the end, and you never ever, eeeeeeever see the calls go the other way versus the Roger Goodell “my special sock is green and gold” favorite packers. Yes packer fans, before you even open your maws and spew half-chewed sausage bits in protest, the *only* fans in the NFL who don’t agree are… you.

That said, the week kicked off on Thursday with a perhaps tone-setting upset as the Chiefs did more than count coups on the Patriots, rather punched them right in the mouth. The Chiefs put on an offensive performance that if it does set their team-tone against a quality D in New England, could spell a shift in dynasty in the AFC. The 3-headed monster of Alex Smith, Tyreek Hill and Kareem Hunt overwhelmed the Pats defense like Kate Upton versus a bra with a series of spectacular plays on the way to a 42-27 victory.

There are days in life you feel like the hammer, and days in life you feel like the nail. When the Rams took on the Colts, you could see who was the hammer and who skipped carpentry class altogether. The viciousness of the beating that the Rams put on the Colts brought up a crucial question: Are the Rams that good or the Colts that bad? Certainly it looked like an episode of The Walking Dead, with Rams players being able to have some dramatic dialogue in the midst of bashing the skulls of shambling beings in, and the 46-9 score certainly connotes a severe level of difference in effort. The question remains… are the Rams taking a big step up? Or did the Colts shuffle backwards and look for something to eat?

Finally… something strange is happening in the sadness factory. The Browns put up a good fight against their rivals, the Steelers, holding the high power Pittsburgh offense to a manageable enough number to eke out a close game. Le’Veon Bell was effectively neutralized, forcing the Steelers to score through the air like calling a 900 number on a cell phone, and the Browns showed… could it be… possibly… gumption? This may be an interesting story unfolding if the hapless Browns start pulling things together while the Bengals collapse and the Steelers seem vulnerable.

That brings us to…

THE GLORY OF VICTORY

Ahhhh it feels nice to start the season with that. The Saints came marching in to US Bank stadium and were systematically dismantled by the Vikings to the tune of 29-19 and playing perhaps the most balanced football seen in Minnesota in over a decade. It has been a long, cold winter since we last saw the game firing on all cylinders as it did Monday night.

The defense did a remarkable, if understated job containing the Big Arm From the Big Easy. Sure, Brees racked up 291 yards and a TD, but much of that was in garbage-time when the Saints got their only touchdown. A series of red zone stands versus the most efficient team in the red zone last year kept Lutz’s leg busy all night. Furthermore, the Saints running game, along with the heralded return of Adrian Peterson to Minnesota, was ground to a halt more thoroughly than a pick up line in a nunnery. Adrian Peterson and Alvin Kamara shared the rushing lead for the Saints with… 18 yards apiece.

Offensively, the Vikings had more 20+ yard plays in one night, than all of last season. It took until the 2nd quarter with a 3-play clinic headed by Sam “Bradpool” throwing ridiculously accurate passes on the way to a touchdown. One such pass to Jarius Wright could literally have landed in a Dixie cup from 20 yards. Wright was sandwiched between 2 defenders and impossible to see from the backfield; It seemed an impossible throw, but Bradpool nailed it like a cracked out carpenter with hammers for hands. Hmmm, that’s 2 carpentry/nailing metaphors in one article. I must need to build something. The fire did not stop burning there, however.

27/32, 324 yards passing, 3 TD’s and 0 interceptions is a fantastic night for any quarterback. Add to that Dalvin Cook shattering Adrian Peterson’s NFL debut record with 127 yards on 22 attempts -in front of his very face, mind you – and you have the makings of a great deal of hype and hope in Minnesota. The success here can be laid firmly at the feet of the Vikings offensive line. We have not seen this level of play from our offensive line in so long we need to have a rune-witch read entrails to remember the last time. Could we finally have found the secret sauce to decent blocking? Can we see more of this in the future?

Last year, I was doing uncannily well with the Lochdowns until the week 7 depression and inevitable contributions to a particularly jolly version of liver disease. Still, you’ve waited this long with baited breath to hear my predictions after I’ve basically told you nothing more than any other sports writer, why give up on originality now? It’s time for the NFL 2017 Week 2 Lochdowns!

First up – Since there needs to be an eternally yawning void of haplessness in a particular spot in the NFL, and since Cleveland may just have climbed out of it, I’m going to nominate the Jets as the next team down. After giving it up to the Bills like they hired body doubles to play, they will do much the same against a hot Raiders team. Hot Raiders… that sounds either dirty or like a really good fair food.

Next up – This will be the hype match of the week. A-A-ron leads the packers into Atlanta vs the Falcons in one of those early season – big time rematches that the NFL loves more than arbitrary fines. Make no mistake, this should be an exciting game from a pure football perspective with 2 very good teams that have something to prove to each other. Now there is a reasoned prediction, and there is wish fulfillment in this case. The reasoned prediction from my lugubrious perspective is that the Falcons are still the better-balanced team, and still have better talent at the skill positions. Jordy is there but he’s no Julio. Montgomery is an actual running back but he’s not Freeman. Atlanta should pull this one off, yet again and make A-A-ron cry. The wish fulfillment is that on a short-and-goal Freeman gets the hand off and lays a shoulder pad so hard into the Sleepwalker-looking-cheapshot-artist mouth of Clay Ass-ews that he wakes up feeling every dirty shot he’s put on every player ever for the rest of the season. See? We can be rational about this.

The Upset Special! – This is going to sound weird, but the upset special this week is the Dolphins over the Chargers. Yes it’s not a heavy against-the odds, but in the face of so much going on in Florida at this time, and the unique situation the Dolphins are finding themselves in… well this is the kind of game Jay Cutler and his “I could give less a crap, but I won’t” expression was made for. An excellent receiver corps, a lack of scouting for the Chargers, and well… let’s face it… the chargers are like when you hear “Are you ready for desserrrrrrrt?” coming out of the kitchen only to be confronted by Jell-O salad. I think that may be why the odds are closer than one would think… not so much because the Chargers are that good, but the Dolphins are putting up with so much. Still, there it is.

Let’s face it, we all know the Saints are about as 1 sided as an argument with the wife. Our defense was a match for their offense, but our offense hasn’t been quite battle tested as of yet. That changes in week 2.

Defensively, the Vikings were able to remove the major weapons from New Orleans, but will they do the same in Pittsburgh? Everyone will be watching the Rhodes/Brown matchup, and my prediction is that they will split the game pretty well. Rhodes will make some great plays but don’t discount Brown having a couple big plays. The real defensive challenge will be containing Le’Veon Bell and the rest of the secondary not giving Burger-boy more than 1 target. If the defense can do that, we can see a repeat of week 1, holding them to field goals and maybe a touchdown.

Offensively, we’re dealing with a good bit more defense than New Orleans could hope to muster. The addition of TJ Watt does not make the offense’s job any easier. Pittsburgh has a fast, swarming defense and a d-line that can challenge most any offensive line in the league. Will our neophyte line hold up and give same that precious pocket? If so, he will continue to rain fire and brimstone with every ball onto their heads. Teams will have to start accounting for Theilen, and that’s only gravy for Diggs. Rudolph… he will lurk and wait. It’s a defensive dilemma for any coordinator.

Add to this Cook’s ability to find seams and burst ahead, and this could turn into a long day for the Steelers should they flag or fail even once. This game may just come down to ball control and turnovers.

In the end, I think that’s exactly what will happen. This will not be a shootout, but I do think the Vikings come away with this one based purely on the range of weapons versus the highly-focused ones in Pitt. Drives will stay alive longer, and more points will be ground out.

And that’s all! It’s good to be back. Stay hopped, my beerstahs!