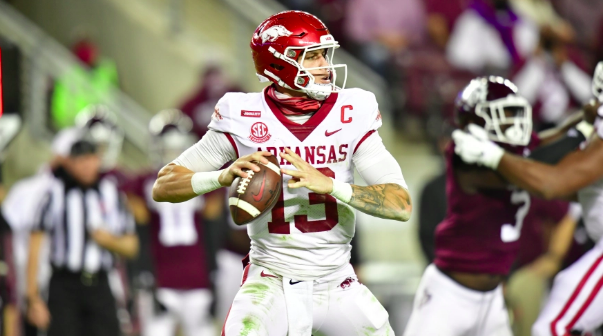 Image Courtesy of University of Arkansas

Senior Bowl director (and former NFL scout) Jim Nagy thinks quarterback Feleipe Franks is generating some buzz and could make a late push to move up draft boards. Franks is viewed by most outlets as a wild card day three pick with some exciting physical traits.

The 6-6, 228-pounder was one of the most accurate deep-ball passers in the country in 2020 per Pro Football Focus College. Franks completed 21 of 36 attempts for 851 yard and eight touchdowns on passes traveling 16 yards or more. According to PFF, Franks’ deepest pass attempt surpassed Patrick Mahomes for the top spot.

In his lone season with the Arkansas Razorbacks, Franks went hogwild completing a program record 68.5% of his passes (breaking a 41-year school record held by Kevin Scanlon 66.2%) for 2,107 yards, 17 touchdowns and four interceptions.

Franks was a heavily recruited four-star prospect from Wakulla High School in Crawfordville, Florida who originally signed with the Florida Gators. In three years at Florida, Franks completed 367 of 622 passes for 4,593 yards, 38 touchdowns and 17 interceptions. He also added 438 yards and eight touchdowns on the ground as a dual threat runner.

After a season ending leg injury in 2019, Franks lost the starting job to Kyle Trask and opted to grad transfer to Arkansas. The transition to Arkansas didn’t look promising on the surface, and his volatile inconsistent play for the Gators left his draft evaluation in serious question.

Nonetheless, Franks flourished amidst the change of scenery to Fayetteville, and his leadership help guide the Razorbacks to the 2020 Mercardi Texas Bowl (cancelled due to covid) in Sam Pittman’s first year as the Arkansas’ head coach.

With no NFL Combine or private workouts this year, the Reese Senior Bowl takes on greater importance in the draft evaluation process. Franks will get his opportunity this week in Mobile, Alabama to showcase his physical traits and impress NFL scouts.

Recent history suggests the Vikings favor day three quarterbacks, so, it might be time to add Feleipe Franks to the Vikefans’ sleeper QB watch list.