Yeah, I know I’ve missed a couple, as I’ve been dodging multiple layers of drama/complication in my daily existence…but I’ve been trying to figure out who the 2018 Minnesota Vikings are, and while I don’t claim to have all the answers, I have seen some trends with our favorite Pack of Perplexing Purple Players…. 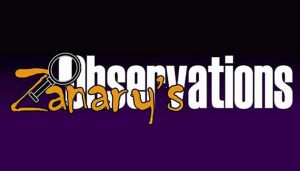 OK, let’s face it: 1-2-1 was not a record any of us wanted, and I don’t recall any of us foretelling it.  While there were concerns about the brutal schedule and the all-too-damned-familiar worries about our o-line, I think 2-2 or better was a common theme going into this season.  I know that I’d picked us to be 4-0 right now, partially because I start every season with a gallon jug of purple Kool-Aid administered via IV.  I keep jugs of the stuff on hand to survive things ranging from trap games to Les Steckell flashbacks to..well, our ****ing o-line.

I just noticed that my tongue and teeth are almost violet.  Huh.

Anyhoo, I figured I’d kinda “think out loud” for a bit, here, while pondering our Vikings:

QB- OK, I’m gonna be VERY clear on this: anyone blaming this season’s early issues on the new, high-dollar QB is snorting Drano.  He’s throwing for almost 347 yards per game, has a 5/1 TD/INT ratio, and has shown that he’s more than capable of answering the call in tough games.  The Buffalo fiasco…eh…I think that the Everson Griffen situation took enough of the team off stride that it snowballed, a situation that’s hopefully resolved by the starting whistle against the Eagles.  My greatest fear is that Cousins is dealing with the aforementioned o-line issues, and our offensive trench players have been career killers for some of our players in the last decade.  Cousins is an undeniable upgrade under center so far, and the people babbling otherwise are the same that can completely ignore the play of the other dozens of players on the roster.

RBs/FB- Here’s part of the problem, although it’s likely a symptom of the main problem.  The Vikings are either last or next to last in rushing yards, partially because Dalvin Cook can’t seem to get all the way healthy, partially because Murray isn’t really a game-changing RB, but mostly because they’re trying to get going behind a blocking unit that are more like revolving doors than locked gates.  More on that later.

WR/TE- These guys aren’t much of the problem either, excepting one guy who’s maybe become a bit of a faith project for Cousins.  Thielen is on a ridiculous pace with 40 grabs for 473 yards and 2 TDs; his main partner-in-crime Diggs is at 27 for 311 and 3 TDs.  Rudolph is off to a slower start than I expected, but the just-recruited Aldrick Robinson got 2 grabs for 33 yards and 2 TDs in one game.  The first-round-bust-elephant in this room is Laquon Treadwell, who Cousins keeps trying to get involved.  To be fair, he’s already over half the catches and yards that he got in all of last season and finally has a TD on the board…but at least one of Cousins’ picks bounced off LT’s hands and went to the opponent(s).  I honestly thought we’d have promoted at least one of the kids by now, but maybe Robinson showed that another veteran WR was what we needed.

O-line- Those of you that have read many of my articles likely knew what I was likely to put in this spot, and yeah…it was really damned tempting.  But, maybe getting our “Elf off the shelf” will get the line playing with more consistency, maybe our newest-drafted OT will bulk up and become a fixture at his position, and maybe this group is the part of the offense that’s taking longest to “bake” in Flip’s new system.  I don’t know, and I’m trying to find a sliver of patience…but this group both sucks and blows at the moment.

D-line/LBs- Maybe not the dumpster fire that the o-line is, but this bunch is not impressing at all right now.  I’ve seen too many runs right between our OTs, opposing QBs with too much time, too many whiffed tackles, and it’s obvious that something is very wrong here.  Maybe the lack of B-Rob’s leadership and the worrisome issues keeping Griffen off the field are having dire effects, but I’d also point out that at least one sports analyst called Barr the most disappointing player in the first quarter of the 2018 NFL season.  NOT extending him is looking brilliant, particularly after he got burned for TDs all through the Rams game.  Was he unfairly tasked with covering WRs due to offensive misdirections?  Maybe…but he was exposed as pure junk in coverage.  Maybe he should concentrate on being a run stuffer and blitzing LB.

CBs/Safeties- One step better than the others in the defense is our secondary, but they’re looking very mediocre lately.  Too many “Rhodes have been open” and Waynes seems to be fighting off a fresh injury every half of each game so far.  I’ve seen Smith get beaten, Sandejo get a ridiculous fine, but have taken some solace in the quick progression of Mike Hughes.  Mackensie Alexander, however, is a complete mess whose assigned players get completed passes on essentially every target.

Special Teams- Punt/kick coverage seems mostly decent if not great, our returners haven’t done much of note yet, our new punter doesn’t seem to be any great improvement…but the sacking (har!) of Carlson for Bailey renewed my battered faith a good bit.

Coaching- Here’s where I have serious concerns: I saw an article, recently, titled something like “Has the NFL figured out Mike Zimmer’s Defense?”…and it has me thinking.  While I have fairly strong faith in our head coach’s ability to find and fix flaws in his system from game to game, I have to wonder if his considerable volume of accessible work has shown too many recurring tendencies, and many teams have figured it out.  I don’t know for certain, and I certainly hope that he and Edwards (and Flip, consulting from the other side) get new wrinkles added, ASAFP.  As for Flip…well, our passing game is better while our running game is largely missing and our o-line is a dumpster fire.  Granted, losing the OL coach right before the season was going to have some effects, but…DAMN.

Conclusion- For all my bitching and moaning above, I’m very aware that it’s very early into a season where the Vikings were dealing with a huge number of changes.  My overall faith in the team is still very strong, I’m optimistic about the Eagles game, and think that the Vikings could improve immensely with a few details dealt with and some gelling here and there.  It’s been hard to write much with the bizarre Griffen situation and the team suddenly weak in its traditional strong areas…but I think it’ll pass, and the bunch will have us in the postseason again!