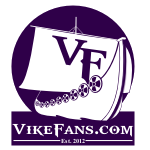 I was really worried about this game. The Vikes spanked the Giants so hard last year I thought the Giants would remember it and bring extra rage. Also, the Giants are my brother-in-law’s favorite team which put additional pressure on the game. I needed to keep bragging rights or I would suffer a year of indignities from my brother-in-law and nephews. There was also the prime time jinx to bury once and for all. We needed a Monday nite victory. Now, having been able to enjoy a day’s worth of victory, here is what I am thinking about.