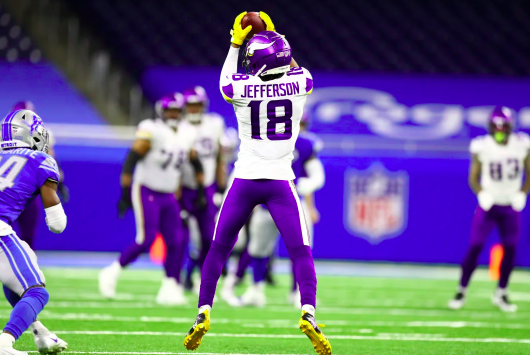 The Minnesota Vikings (7-9) added another w to the win column with a 37-35 final over the Detroit Lions at Ford Field.  The Vikings capped off a disappointing 2020 season on a high note finishing 6-4 after the bye over the final 10 games.  The high note, however, wasn’t necessarily the win as much as it was the way Justin Jefferson closed out his season breaking Anquan Boldin’s rookie receiving record of 1,377 yards. Entering the game, Jefferson was eyeing Randy Moss’ (1,313) franchise rookie yardage mark. His 9 catches for 133 yards not only surpassed Moss, but also broke Boldin’s NFL mark which stood for 16 seasons.

With Dalvin Cook out, Vikings’ quarterback Kirk Cousins got the green light to open things up a little more offensively. Cousins was impressive hitting on 28 of 40 throws for 405 yards (3TD) and also added a 1-yard score on a quarterback sneak.

RB Alexander Mattison had a productive day racking up 145 total yards and 2 touchdowns.  Mattison got the Vikings on the board in the 1st quarter with a 28-yard touchdown pass from Cousins that gave the Vikings a 7-6 lead. He found pay dirt again in the 3rd quarters on a 2-yard run that helped the Vikings regain the lead 28-23. Mattison finished the day with 95 yards on 21 carries. The Vikings never relinquished the lead after Mattison’s 2nd score as Minnesota top Detroit for 3rd place in the NFC North.

The Vikings struggled once again on defense giving up 35 points and 417 total yards. Dan Bailey miss an extra point attempted and a field goal try as the kicking game continued it’s woes as well.

“Once this week is over then Rick Spielman, George Paton and I will set down and figure out exactly which way to go,” Mike Zimmer said during his post-game press conference. “I have a decent idea on a lot of areas right now.”

“7-9 isn’t great, but with all that went on this year, maybe it’s the best we could do,” Zimmer added.

Zimmer has been supportive of Bailey over the last few weeks, but kicking might be one of those areas he will look to improve over the offseason.