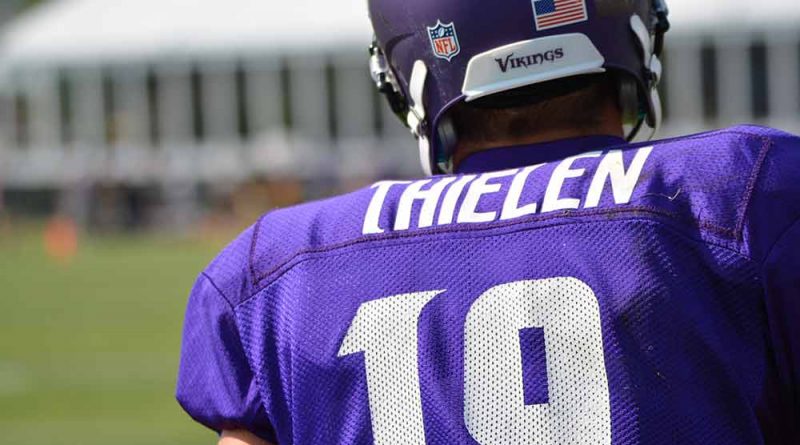 The Vikings have added several pieces to their offense that could lead to matchup dilemmas for opponents defensive coordinators. One personnel package that offensive coordinator Pat Shurmur could bring to bear is a 22 look, 2 backs, 2 tight ends, 1 wide Receiver. On the field in this package is Latavius Murray, Dalvin Cook, Kyle Rudolph, Bucky Hodges, and Adam Thielen.

On the surface, this looks like a run formation. Pat can set the tight ends off either offensive tackle, or double up to one side of the formation. The defensive coordinator will most likely set in their base defense, either 4-3 or 3-4 without a nickel back on the field. If so, this gives Shurmur the opportunity to attack via the air and create some imposing mismatches.

If Bradford’s presnap read is base defense, he audibles to pass. Hodges motions out wide to the wide receiver slot. Rudy flexes out to a slot on one side. Cook moves to the slot opposite Rudy. If the defense sends a line backer out to cover Hodges you have a two way mismatch: Hodges will be a difficult task for a line backer to cover, or now with a line backer out of the box, Bradford audibles back to run. Vikings can now run Murray against a six man box.

If a corner goes out to cover Hodges, you have Cook lined up on a line backer. On the outside, Hodges with a 6″, 50 lbs mismatch on a corner back. Cook in the pass pattern on a line backer should be another mismatch to exploit. If the defense counters with the blitz, Bradford has hot reads to whatever side the Blitzer comes from, Murray in pass pro or as a safety valve.

The beauty of the 22 personnel look is the flexibility guys like Hodges, Murray, and Cook bring. You can morph this look even further with different personnel. Swap out Murray for Jet and maybe you go Wildcat. Swap Hodges for Morgan and you put a better blocking tight end on the field who still has great hands.

Shurmur should be able to align his new chess pieces all over the board and create some interesting mismatches for the O to exploit. This is one look I hope to see on the field.